Will the Social Media bubble burst?

Every time I hear more often than the bubble of Social Media or social networks is about to explode. As a Social Media Manager, I still do not have a sufficiently formed opinion, but I see on the horizon elements that can pose a danger to the survival of the phenomenon of social networks as we conceive some at this time. At the same time, I believe that the new way of relating through networks is so ingrained that it is easier to undergo transformations, so I see it difficult to disappear. 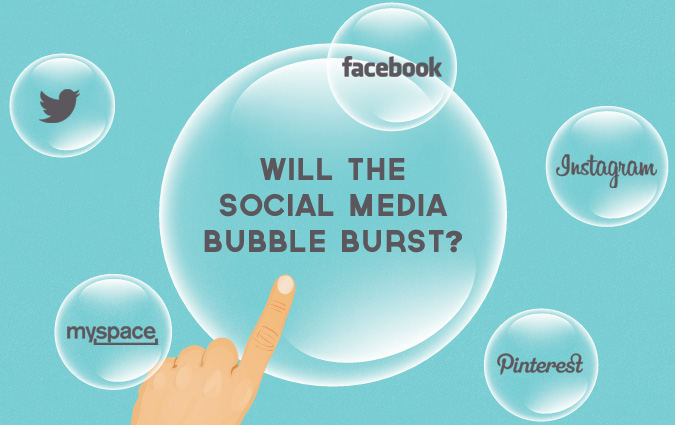 The dangerous elements quickly detect when the walls and timeline of many social networks are invaded by commercial content of many companies do not realize, or yes, you are destroying the philosophy that prevails in social networks add value non-commercial to engage in one-on-one conversations instead of between vendors and clients. Many times I have insisted on this web space that we talk about social networks and not commercial networks. Each brand or company has its website and its advertisements to introduce and inform about their offers, but in Social Media we are not there for that. Not exclusively

And it’s not about blaming the companies, but many who are professionals of Social Media Management and surely because of their ignorance have been dedicated to creating profiles of companies and brands wholesale and without any criteria as channels to talk of themselves and their products, generating a noise that does not benefit anyone: neither users, nor the companies themselves, nor those who are professionals.

Of course, I think that the Internet as a communication channel for more and more generations still protects the survival of networks as a phenomenon, although not individually. Let me explain: Facebook, although today is the most poplar social network with more than 800 million users in the world, does not have its survival assured. And already begin to appear symptoms of exhaustion of its participants: less time of use, fewer connections a week, migration to Twitter … Although it is not an exclusive problem of Facebook, because in the network of 140 characters also begins to have excessive commercial noise. To make him look.

And I wonder: Google will not have this phenomenon analyzed and hence its commitment to Google+ as a social network where the messages of companies are more effective without invading the walls of other users? Or has this effect benefited from a rebound? It is true that after a year of life of Google +, it is still unknown and only remains as such because it is a Google product, but it is possible that through the circles and its integration with Google Maps, Docs, Drive, Gmail and others services of the Internet giant, become a very attractive network for professionals and companies.

In short, the Social Media bubble will surely explode as a result of an evolution that does not stop for anyone. Companies and users must find our space and social networks will surely give it to us through specialization and segmentation. Of course, the question of whether Facebook will remain the most popular network for a long time, I get wet right now and answer that if you do not introduce changes so that companies do not invade the walls with commercial messages that other users have not requested, has the days numbered.