How to get out of that one. The Italian job.

If I was Charlie Croker I would be very unhappy with the outcome of the Italian Job. All that planning and logistics goes right out of the window, quite literally in fact when the Bus that hey are ferrying the gold goes far to fast and ends up balancing over the edge of an Alpine roadway the gold bullion up one end the crooks up the other.  Charlie states the problem quite succinctly.

“Keep back! And don’t nobody get out nyver! The gold is pulling us over the edge.” Charlie edges his way down towards the gold and looks round to incredulously to see the other s following him.

“Get back! Get Back!” he shouts. He gets down on the floor so as to distribute the weight and starts to crawl. It is to no avail as the gold slowly slides back towards the door and its doom. What does Charlie do? 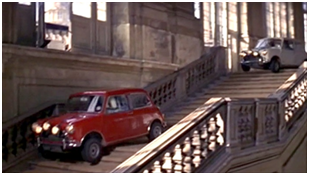 It is a conundrum that has sparked debate for years and has contributed to the legacy of this brilliant film. Up until this point everything has gone to plan the red white and blue mini coopers have successful evaded the police and unloaded the gold in the coach. They are then most unceremonially dumped out the back. This is very sad a quick visit a Cheltenham Car Leasing company would have meant that you could have had some quite cheaply. Have a look at http://www.mphvehiclesolutions.co.uk/  for an idea on that.

So, how do we get the gold back. Charlie is quite right the golds weight is being counter balanced by the lads. It an almost perfect match which means there is going to be an issue with the movement of the guys. If one gets out the balance will go and if one goes down to grab the gold that will also tip it over to the gold side and it will slip out.  What is the answer? Many people have suggested a solution here ( I like the use of chemicals particularly) but here is mine. The gang are generally all wearing scarves and hats or jackets. If they have enough then a rudimentary rope might be an idea to put together by tightly tying together clothing including belts. If that could be then thrown around at least one of the pallets and then pulled back that might be enough. To get more weight up the right end for the gang. As it’s a rear wheel drive coach though how they get all that gold back is another problem.