How the New Forest was created

Down in the depths of Hampshire lies the New Forest National Park. Does this mean it was planted only a few years ago? Not quite, in fact it’s the opposite as it dates back to the Domesday Book and is one of the few free pasturelands and unspoilt habitats that remain in the UK. So. not very new at all then. It is one of the last relics of what a prehistoric Britain looked like. Back then the whole of the country was covered in Deciduous hardwood trees like birch then Beech and Oak. Our ancestors in the Mesolitihc age needed wood more than at any other time in human history and they were soon felling them to make halls, homes and firewood.

As a Dorset Tree Surgeon based company like Kieran Boyland will tell you this can only go on for so long and soon parts of the country like in the Moors of Devon, Cornwall and North Yorkshire and the Outer Hebrides, do not recover as they are given solely over to grazing cattle and sheep. However some remained and it was the arrival of the Normans that ensured we have a fair bit of forest to this day. 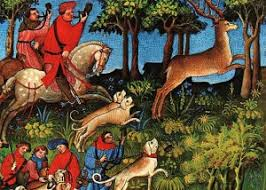 William the First (or Conqueror as he is better known) liked a bit of hunting so as to unwind after a day of tyrannical kinging. He declared several parts of his newly conquered realm as Royal Forest and the only people allowed in were him and his mates the Barons. However early medieval fence and wall building were not able to cover that vast area and people still poached and used the land. Some were even vital to its upkeep.